Kevin McGinty jokes that he and his wife, Nancy, have long shared a sense of adventure – “with a small A.” Their Providenciales adventure began 25 years ago with a newspaper article and a coincidental connection on a snowy morning in Cleveland.

The McGintys made their first vacation here on the recommendation of a business associate and a short fea­ture about a resort opening in Turks and Caicos. Five visits later, they went looking for real estate and discovered a neighborhood called Turtle Tail on Provo’s South Shore.

Located on a roughly three-mile elbow of land be­tween Flamingo Lake, Juba Point Salina and the Caicos Bank, tranquil Turtle Tail is well off Provo’s beaten track and bears little resemblance to many of the island’s more well-known settings. The landscape is a departure from the archetypal white-sand beaches that made the island famous around the luxury travel world.

Here, where land meets the wide, shallow flats of southern Provo, the sea often marches right up to iron shore. Inland, the broad lake teems with mangroves, birds and other wildlife.
“It feels as if we are right on top of the ocean,” Nancy says of standing on the terrace of the McGinty’s custom home, which sits atop the ridge between lake and ocean. “And when you look at the stars at night, it seems as if you can reach out and touch them. We see the sunrise and the
sunset, It’s just beautiful.”

After 20 years on Turtle Tail, the highlight of their day is still “who gets to see the first turtle or ray,” Kevin says. The McGintys spend hours kayaking, soaking up all the natural splendor the neighborhood has to offer.

“Turtle Tail offers a sense of remoteness in a good way, and yet it’s five minutes from everything you need.”

The neighborhood is also home to a tennis club, Na­tional Stadium with a running track, private high school and the South Side Marina.

But this hidden gem is evolving. The rough, unpaved, four-mile road that connects the neighborhood to Lee­ward Highway is in the midst of a pavement upgrade.

Venturing down Venetian Road the true beauty of the neighborhood is obscured by nature as much as it revealed. The road gives glimpses of the built environ­ment, which ranges from the simple and practical to the grand and fanciful. To grasp the glory of the actual landscape, one must get off the road and upon the ridge that overlooks both lake and ocean.

That’s what attracted Gansevoort Turks + Caicos developers Rob Ayer and Bruce Maclaren to plan a new five-villa luxury development that’s now underway in the neighborhood.
“A lot of the original estate homes were built in Turtle Tail because of the views of the Caicos Bank,” said Ayer. “You have the expansive view and unique colors you don’t get anywhere else.”

Most homes built in the community, including the modern architecture of the Gansevoort villas, are de­signed to appreciate prevailing breezes. “The trade winds are your air conditioning,” Maclaren jokes.

It was Maclaren who first eyed the spot on Jim Hill near the marina. “I knew instantly when I saw it,” he says.

Maclaren loves the natural sense of seclusion, which he attributes to the variable elevation. 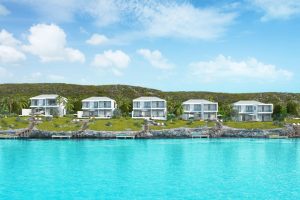 “I absolutely love Grace Bay beach, but I think (Turtle Tail) gives a different experience from Grace Bay or other Turks and Caicos beaches,” he said. “It is so private, so quiet.”

Proximity to the Gansevoort on Grace Bay beach is also what made the location an ideal fit for the Gansevoort villas. A short drive to the hotel and villa guests will also have the benefit of the resort’s two restaurants, Exhale spa and beach facilities.

“We are offering privacy and exclusivity of your own villa, with the amenities and luxuries of our hotel on Grace Bay,’ says Ayer. “We think it is a perfect match.”