Sundays on the island of Providenciales can be deliciously sleepy affairs. Pairing sunrise beach strolls with relaxed late morning brunches, a few rounds of golf or an afternoon on the water (or sofa) tends to ease the familiar ‘nothing to do’ vibe of the week’s first day. If then, given the option of succumbing to battery recharging sleepiness or attending the Tropi Pool Party, you could be forgiven for choosing the former – but you’d be missing out on an outrageous amount of fun.

Picture one of those perfect weather days where an oceanic blue sky and searing sun begs you to get into the water, the Colonnade pool at the Shore Club transforms from its usual picture of elegant tranquility into an oasis of free spirited revelry. Walking past the private poolside cabanas into the grand Colonnade where infectious house music immediately seduces your limbs to dance, the first emotion you’ll probably experience is relief, grateful you hadn’t convinced yourself to spend the day napping.

As spring sunshine and waves of house music ease you into the sparkling water, perhaps you’ll just take a dip, you think to yourself in vain. Unable to resist the happy-go-lucky vibes of the Tropi, you soon become as joyously carefree as the other party goers who seem to have left their worries in the parking lot. Zooming past you, a group of laughing bachelorettes on a hippo sized inflatable effortlessly volley beach balls across the pool without spilling their frostily chilled glasses of champagne. Bottles of Veuve Clicquot glint at every turn, exuberantly popping every so often. Good music, great vibes, and endless champagne – a recipe for summer bliss the Tropi has gradually perfected since its inaugural fete four years ago.

DJ Dayoh, or Michael Burchill, the party’s creator and a local connoisseur of good vibes can be thanked for bringing world class house music to the Shore Club. Of the bringing together of that luxurious venue, international guests and local hospitality, Burchill says, “I have the opportunity to work in really amazing venues, hotels, resorts, and villas on island and I see Tropi as an extension of that.” With an aim to attract guests who want to experience music events on islands Burchill rhetorically asks, “Music events are happening all over the world – why shouldn’t we be in that mix?”

Think Vegas, Miami, Ibiza or summertime rooftops in New York and the global scene for sunshine fueled day parties seems exclusive to the big city. Even with such stiff international competition, Burchill thinks Turks & Caicos has something very special to offer saying, “I don’t want it to be like other events, I want the Tropi to develop into its own.”

That evolution, taking place over the last four years, has seen more support than ever this go round with Veuve Clicquot officially signing on as the title sponsor. That’s in addition to The Shore Club which provided an ideal venue and support from service providers such as Stelle, Grace Bay Car Rentals and Eden Yacht Charters. 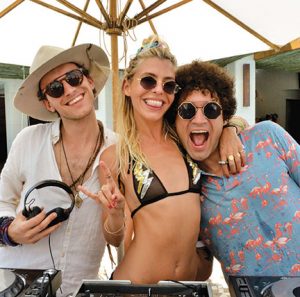 It isn’t just local sponsors that believe in the Tropi, international house DJs Golden Pony and FDVM have given it their stamp of approval, coming down to the Turks & Caicos to play live. In this, Burchill’s vision of having some of his favorite house DJs take Turks and Caicos by storm has come alive.

Take Victorien Mulliez for example, he’s half of the French DJ Duo FDVM, lives in New York City, but often travels for his music. In the month leading up to the Tropi he had been in Kenya, New York, Los Angeles and his native France but was excited to be back at the event for his second year running. “It is a beautiful event. And Michael, the energy he has, and how he wants to bring people together is beautiful. I love the vibe here. What’s cool is that it is the beginning, the seed is planted and it is really growing and to be a part of this growth is beautiful. For the island, it is amazing to have a place where people can gather and dance and celebrate. Here it is all about creating a beautiful vibe and celebrating life.”

With the next installment of the Tropi currently being planned, you won’t want to miss the celebration of all things good music, good friends, good vibes, and champagne bubbles.