school gets tools and tech upgrade from Amanyara

Turks and Caicos dignitaries and members of the Amanyara Resort staff are used to warm welcomes at community celebrations – but their reception at a Clement Howell High School ceremony last fall seemed to catch everyone by surprise. The Nov. 21 event was a ribbon-cutting for updates to the CHHS Industrial Arts Department. But the reaction to the improvements appeared truly emotional – bordering on giddy – for everyone involved.

“Our students have been excited, but the teachers are ecstatic,” Principal Kadean Cunningham explained. “They know the difference this can make in the program.”

The story began in 2016, when Marco Franck – Amanyara’s general manager at the time – visited neighboring Osetta Jolly Primary School to present a donation. Before returning to the resort, Franck struck up a conversation with faculty members from the adjacent high school and mentioned his interest in their vocational program. That lead to the head of the Industrial Arts Department, Damian Williams, giving Franck a summary of the program’s concerns and challenges.

Rather than leave it for later, the two men immediately set out for an impromptu tour of the school’s woodworking lab. While Williams talked about the school’s aspirations to prepare students for trades demanded by the local construction sector, Franck’s eyes took stock of the program’s realities: imperfect instructional space, obsolete equipment, and shortages of everything from shelving to safety gear. “And with few words, (Franck) turned and said, ‘OK,” Williams recalled. The resort manager had been moved to action. 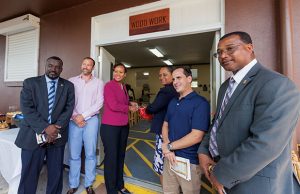 Back at the office, Franck set to work on an ambitious project that would transform the department, which teaches woodworking, technical drawing, computer-assisted design, and electrical and construction trades. First, the resort set up a holiday-season “giving tree” in its lobby. Each ornament represented a tool the department needed. Resort guests, villa owners and employees embraced the project, making cash donations that Amanyara staff used to purchase the equipment delivered to the school a year later.

Beyond that, Amanyara renovated the woodworking lab and adjacent offices, and donated an art installation created by artist Dasic Fernandez to the school’s garden. Franck wasn’t there to share the joy – he’s since moved on to Aman’s Asian operation – but during the handing over ceremony, current resort General Manager Serge Ditesheim spoke of his pride in taking on the legacy of the project from Franck. A legacy that may span decades.

Deputy Gov. Anya Williams – on hand to cut the ribbon – spoke about the multiplier effect of helping students, “because what you give on to them, they can then give on to others.”

Damian Williams, summarized the project’s community value with a heartfelt promise: “We are going to ensure this is not a one-sided partnership,” he said, “because we will make a donation in the form of these students’ work. You will see more of our students in employment at your establishment.”