wade’s green plantation: ties to the past

The sands of time have hidden from modern remembrances the storied remains of many bygone worlds.  It was famed archaeologist Howard Carter who after an obsessive search in the 1920s finally unveiled to the world the nearly intact tomb of the 18th dynasty Kemetic boy Pharaoh, Tutankhamen. Here in the Turks and Caicos, Paul Farnsworth of Louisiana State University excavated in 1989 what is now known to be the best-preserved plantation site in all the Caicos Islands, Wade’s Green.

Wade’s Green Plantation never disappeared from the modern memo­ries of Turks and Caicos Islanders, especially those of the island of North Caicos. There are elders still living in the historic settlement of Kew, where you will find the plantation, that were born there in the early years of the 20th century. Those were days, in the 1920s and ’30s, when the limestone ruins of a once buzzing urban environment quietly saw its final inhabitants venture out and into other settlements and islands leaving a complex history undisturbed for decades. 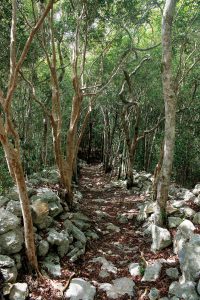 Wade’s Green welcomes visitors, locals and tourists alike down its iconic stonewall lanes and into a tropical forest that has been growing since the days of its first inhabitants.

Today, Wade’s Green welcomes visitors, locals and tourists alike down its iconic stonewall lanes and into a tropical forest that has been growing since the days of its first inhabitants. If the branches of those Caicos mahoganies could speak they would tell stories of forbidden lovers, rebels, and midnight escapes by enslaved people to freedom.

The heavy vibrations of its living past whisper softly even amidst the overwhelming songs of hundreds of thousands of cicada bugs, emerging for the first time in 17 years during the month of August when I visited. Luckily for me, a knowledgeable friend and lay Turks and Caicos historian Bryan ‘Naqqi’ Manco accompanied me on my tour, helping to illuminate the legacy of the Wade’s Green ruins.

The plantation got its name from a man called Wade Stubbs, a Florida Loyalist during the American Revolutionary war who listed his losses after the defeat of the British as being 1,450 acres of land, 15 head of stock, four riding horses and slave holdings of three Negro men and two children. After being granted 860 acres by the British Crown on the 27th of March, 1789, Stubbs set up “Bellefield” on the island known then as Grand Caicos, bounded on its western side by the property of my forefa­ther, James Misick.

On the 10th of February, 1791, Stubbs was granted a further 100 acres. It is then the story of this hallowed place begins.

A welcome sign with the mark of the man greets you at its entrance, a chilling reminder of the power it once wielded, purchasing the lives of other human beings as mere chattel. Three hundred eighty-four of them, bought and enslaved by Stubbs to make his Belle­field plantation profitable, were given the lifelong task of building the impressive stone walls and buildings that surround the entire plantation, but more importantly, harvesting and processing a plant that still grows wild amongst the ruins. Not cotton, which was attempted first before miserably failing, but an aloe vera twin – the green-leaved, Agave descendant, sisal. 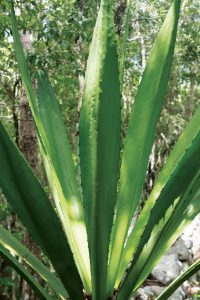 Sisal plants continue to grow within the stone walls, a persistent reminder of the plantation’s past.

In the pre-plastic 18th century, sisal was renowned for its strength, durability, stretchiness, and resistance to deteriora­tion in saltwater.  Prior to cargo ships and airplanes, its fibers’ ability to be naturally processed into rope made the Bellefield plantation fantastically profitable.

As we follow the handsome roads bound­ed by walls my forebears built, Bryan and I traverse the shaded ruins of the once lawn gardens that gave the place its surname ‘Green’. He shares with me the scandalous and fascinating details of the historical find­ings of researchers from diaries and record books dating back 200 years. A forbidden romance between a slave called Fred and his Loyalist widow mistress once threw the plantation into an unimaginable bacchanal of drama. With the single largest escape of enslaved people in the Bahamian Archi­pelago in 1800 to the liberated new nation of Haiti, the people of Wade’s Green once made newspaper headlines throughout the thriving plantation-based economies of the British Caribbean and American South.

After the death of Stubbs, outlaw of slav­ery, and subsequent abandonment of the plantation by his descendants, Wade’s Green continued to serve as a town center, court house, prison, and in its latter days, a refuge for the people of Kew.

With its whispering trees, stonewall lanes, and finely preserved colonial buildings, Wade’s Green Plantation still sits at the seat of a complex web of history, simply waiting to be excavated and explored.

if you go
Wade’s Green Plantation is lo­cated near the village of Kew on North Caicos.  The $10 entry fee includes a tour through the plantation with a Na­tional Trust guide. The walk lasts 30 – 40 minutes. For hours and guide availabil­ity, visit the National Trust website: tcnationaltrust.org
The island of North Caicos is reachable from Providenciales by ferry. Return ferry service departs multiple times per day from Heav­ing Down Rock marina in Leeward on the east end of the island.