The Turks and Caicos’ tastiest invasive species gets the nation’s full attention — both under the water and on the plate — starting on Saturday, Oct. 29.

TCI’s first Lionfish Festival comprises two separate events: A Provo festival on Oct. 29 at Turtle Cove Marina, and a Grand Turk festival at the library the following week on Saturday, Nov. 5. Both events are free to the public, with kid-friendly games, live music, lionfish samples and demonstrations.

But the focus of each will be a single-day, REEF-sanctioned Lionfish Derby, pitting four-person teams of spearfishing divers against each other in a competition to collect and remove the most lionfish from the nation’s reefs and waters. Cash prizes as large as $1,000 will be awarded for teams catching the most, the biggest, and the smallest lionfish. Registration is $40 per team, and can be completed online by visiting www.tcreef.org/lionfishderby.html.

The festivals will be hosted by the Ministry of Tourism, Environment, Heritage and Culture’s Department of Environment and Coastal Resources (DECR) and the Department of Culture, in conjunction with the Turks and Caicos Reef Fund.

Showy, colorful lionfish arrived in the United States from Asia as prized aquarium pets, but escaped into the wild and made their way south through the Bahamas. Held in check in their home waters by natural predators, lionfish populations exploded upon arrival in the West Indies as the invaders feasted on fish and crustaceans without a care for their own safety. Biologists began sounding the alarm about a decade ago, warning that local ecosystems and seafood harvests could soon decline unless humans began aggressively harvesting the newcomers.

The trick? Get people hooked on lionfish as a delicacy, thereby offering fishermen greater incentive to hunt them down.

“Some TCI fishermen have been catching lionfish on a small scale for many years, and they know that although it’s invasive, lionfish is a very tasty fish,” said DECR Director Dr. John Claydon. “However, these fishers do not typically target lionfish heavily because crawfish, conch, and other finfish are more profitable. So we hope that the festival results in many lionfish being caught and eaten, which will give our reefs a helping hand and also raise awareness about this invasive species.

“Above all we hope the events are fun and that many people from all walks of life come to take part,” Claydon said.

The Providenciales and Grand Turks derbies each begin at sunrise, with teams required to bring their catch to the festival marinas by 3 p.m. for scoring. Organizers are recruiting teams and reaching out to fishermen, water-sports and dive charter operators to find more participants. Teams may hunt the lionfish while free diving or snorkeling. To accommodate divers from South Caicos, the School of Field Studies will conduct scoring on Nov. 5 and report the results for competition in the Grand Turk Derby. 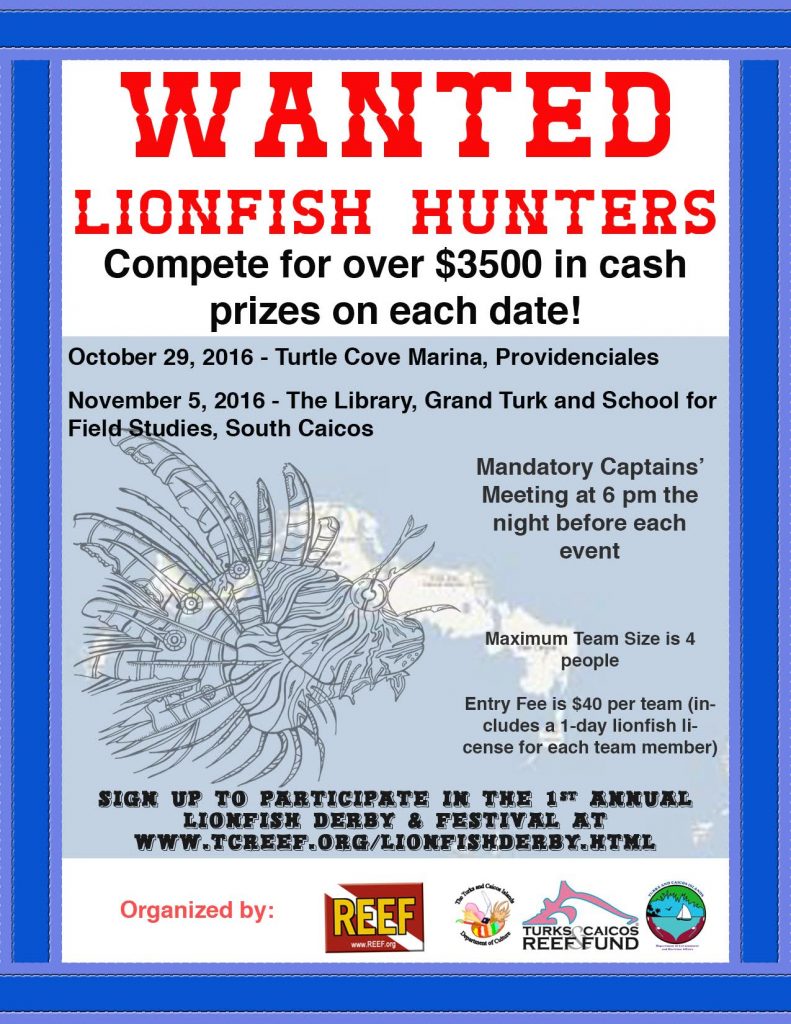