Poor, sweet Jenna Marshall! Tormented –then  blinded! – by the jealous mean-girl clique of Rosewood, USA, while still just a teenager! But she’ll get her revenge. Or will she?

That’s the Tammin Sursok known to fans of the hit Freeform network series Pretty Little Li­ars (once described as “Desperate Housewives for teenagers”). Think over-the-top tween/teen melodrama, with the intensity of every situa­tion turned up to 11. 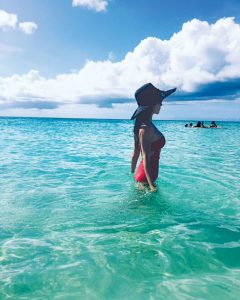 Traveling with her family is a top priority for the uber-busy television star and blogger.
(INSTAGRAM IMAGE: @TAMMINSURSOK)

But that’s the TV Sursok. The Sursok we met this summer was a beautiful, 32-year-old Aus­tralian on a well-deserved vacation at Beaches Turks & Caicos Villages & Spa, accompanied by her handsome husband and their precious then 2-year-old daughter, Phoenix – who, by the way, seemed blissfully convinced that she’d wandered into a tropical paradise inexplicably inhabited by Sesame Street characters. Which, if you think about it, is even more blissful for parents in search of a some much-needed couple time.

“Phoenix was obsessed with the Sesame Club,” Sursok said of their first visit to Beaches in 2015. “I remember coming back – we had never left her anywhere –and she was there for an hour, and when we got back she told us to leave, because she was having such a great time.”

So while there’s a very public Sursok – cover girl, platinum recording star, social media powerhouse, the Sexiest Woman in Australia – there’s also a very human Sursok. The human being was all you saw during her most recent visit to Provo: Natural, personable, genuine, and remarkably well-grounded in the funda­mentals of happiness.

With busy professional schedules constantly nipping at their heels, Sursok and writer-direc­tor husband Sean McEwan understand that marriage requires energy, effort and commit­ment. That means indulging their shared love of travel, enjoying time with their daughter, and always making time for a date night. 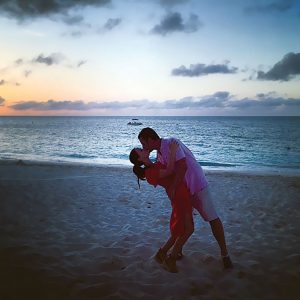 Hence the return trip to Beaches Turks and Caicos Resorts Villages and Spa. The couple loves how the inclusive family resort puts ev­eryone into instant relaxation mode, checking off all the personal-family-relationship boxes.

“It’s so amazing,” she said. “Being in the States you are so close to something that is so exotic and so beautiful. I truly believe the water in Turks and Caicos is some of the best I’ve ever been in. Especially being a working mother and career woman, I think it is hard to take a break with your family, so Turks and Caicos is our desired spot.” 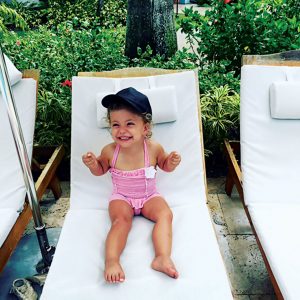 Seeing the excitement of her daughter, Phoenix, was a highlight for Sursok.
(INSTAGRAM IMAGE: @TAMMINSURSOK)

Making the most of their down-time is a worthwhile investment for Sursok and McE­wan, given the multiple creative projects they’re juggling.

She recently rolled out a new clothing line for toddlers, Stella Phoe­nix, and the couple’s production company, Charlie Baby Productions, this fall inked a development deal for a new comedy series called Aussie Girl. The show, loosely based on Sursok’s experiences in Hollywood, has been described as a hybrid of Unbreakable Kimmy Schmidt and Inside Amy Schumer. McEwan will write, Sursok will star.

It’s a big step, but Sursok has been tran­sitioning away from her eternal-teenager screen persona ever since becoming a mother, a process she documents in her candid posts on Bottle and Heels, a website she created for moms.

“After I had my daughter I didn’t re­ally have a community network of people around me,” she said. “They say a child needs to be raised by a village of women and fam­ily, and I didn’t really have any of that. So I wanted to create something like an online community and a network of women that can come together and talk about things they’re going through: The good things, the hardships, the sexy things and the unattractive things. 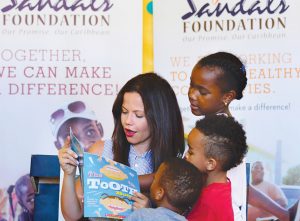 “I think it’s really important for females, especially, to talk about what they’re going through, because sometimes there is not an even playing ground. I think it is important to change the conversation.”

Her travel tip for moms?

“Do it. It’s so hard to travel when you have kids, but it’s always a positive. They learn so much about different cultures and dif­ferent types of people, and they’re much more worldly. If you want a nice vacation that has something for everyone, I would definitely go to Turks and Caicos. Can’t wait to come back!”