There are elements of the new $100 million, 38-suite, 110-room, six-villa Shore Club on Providenciales’ Long Bay that fall well within the conventional expectations of a 21st century high-end luxury resort.

After all, resort developer Stan Hartling didn’t originally set out to redefine luxury travel. He had a bigger existential question to answer first: Can a high-end luxury resort on Provo succeed if it isn’t located on Grace Bay? 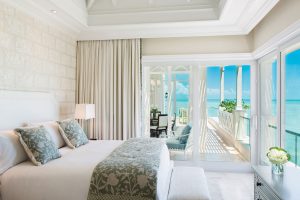 Hand-selected natural materials and furnishings were inspired by their island environment.

Pre-sales figures indicate Hartling has already put that question to rest, though the formal an­swer will come this season when the resort opens to visitors. But stroll through the stunning open spaces, exquisite suites and sculpted outdoor areas alongside Hartling, and you’ll find yourself noticing that what makes Shore Club different isn’t just its location, but its focused attention on every imaginable detail.

Yes, Shore Club has all the sweeping scale you’d expect from a classic luxury destination, but make no mistake: The genius of this creation lies in a series of tiny decisions, little touches, and purposeful nuances.

There’s a logic to it. Much of the tourism indus­try succeeds by wringing narrow margins from calculated compromises, but the international luxury market operates more like competition in a top-level sports league than a traditional busi­ness: You pay a premium for small advantages because the difference between success and failure, between excellence and mediocrity, is enormous.

So yes, it’s absolutely a business. But Hartling – The Sands and The Palms developer – approached everything about The Shore Club personally. 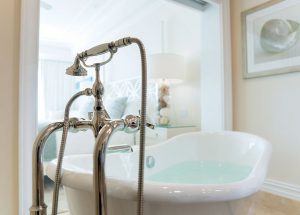 Every detail, down to the Waterworks bathroom fixtures, was selected for its artisanal quality craftsmanship.

“I am not sure what I could do that I would enjoy more than coming here and seeing something that isn’t ordinary,” he said. “I treat it truly like my home. I treat it like I have to be able to look at this in 10 years and still be proud of it.”

The Shore Club over-delivers on standard re­sort amenities, but in today’s market, such amenities are essentially compulsory. A requirement, but not necessarily enough to distinguish a competitor in a crowded field.

Hartling has long set himself the standard of delivering pleasant surprises to guests and buyers, but with Shore Club, he found himself reaching further than ever. It had to be impressive, but it also had to be authentic.

His solution? A simple, universal edict: Every choice his team made had to produce tangible results that felt handmade.

“There are so many things we have not allowed to happen, so that everything has that right feel, right down to the doors,” he said. “I do not allow them to be sprayed in the factory. They have to be hand-painted, all the moldings have to be hand-painted, because we want the little brush marks, we want that sense of tactile realness that you get when you go into someone’s home.

“You might not consciously pick up on that, but if that door was sprayed in a fac­tory gloss, your mind would just sand away a little bit of that authentic feel. And then if you saw standard door handles you’ve seen a thousand times, your mind would sand off a little more of what you think is unique. So it’s about what you don’t let your mind take away.” 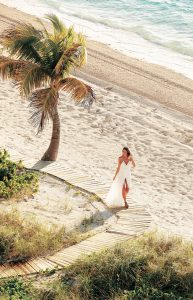 Shore Club is located along a stretch of paradisical Long Bay Beach.

On the other hand, sometimes design is about knowing when to stop. After decades in the business, Hartling senses that bound­ary intuitively.
“Sometimes you walk into a room and they’ve overdone it with one aspect. At Shore Club there’s not one dominant thing, because the design doesn’t take away from the view.”

With so much on the line and so much of himself poured into this project over the years, Hartling is clearly proud of his team from The Hartling Group. They feel they’ve created something entirely out of the or­dinary.

“We have done so many things with this project that are milestones. We came out of the ground when no other projects were. We nurtured and created a new destination.

“I think that has helped differentiate this from just creating another resort,” Hartling said. “Otherwise, for me, the whole exercise would be considered a failure, even if it was economically successful. That’s what gets us all up in the morning.”