There’s a reason people tell talented photographers that they’ve got “an eye.” The art of capturing extraordinary im­ages through the vessel of a camera requires more than just pointing and clicking. Instead, it takes the gift of seeing beyond the prisms of normality.  The process of photography for 26-year-old Renau Destine is like alchemy, taking natural elements and transforming them into something that remains pure, but extraordinary in its revelation of what has always been there but somehow hidden.

Born in Providenciales, the Clement How­ell High School alumnus says photography has always enthralled him. “Working with cameras was something I developed from church, recording services and capturing events, but even then I knew photography was what I loved.”  Those experiences pro­pelled Destine into the world of multimedia upon graduating from Clement Howell in 2007.  He started working at a local news station as one of the editors and camera op­erators, but constantly found himself being drawn back to photography. 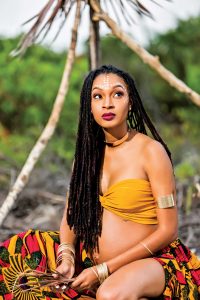 Destine says, “I think it’s because I initially wanted to be an architect and I started see­ing a lot of similarities between the two art forms. Both require you to look at reality and basically create something from nothing.  In architecture, you draft a plan for a space based on your creativity and perception. It’s all about perception, and with photography, my mind perceives things in a way that’s unique to me.”

Destine’s eye for evocative imagery soon captured the attention of Andre Kerr, the founder of multimedia firm Spotlight Communications.  Kerr encouraged Destine to join the team, which he did, in a collabora­tive effort that has proven to be both cre­atively and entrepreneurially fruitful.  Being well versed in a variety of media disciplines has provided Destine with diverse opportu­nities to use his gifts throughout the islands, but there is a single golden thread woven throughout the tapestry of his work. “Love!” Destine says instinctively without even a hint of irony. “It sounds cliché, but from maternity and weddings, to newborns and family portraits, there’s an emotional con­nection between the people I photograph… a special connection between myself and them.” For Renau Destine, that special con­nection is what transforms the split second of a moment frozen in the antechamber of his camera into a living memory worth keep­ing forever.