randy moss: keeping an eye on the ball

Like most sports-loving Canadi­ans, Ryan Jones grew up playing hockey. At some point, though, he and his twin brother began gravi­tating toward American football. It became his great love. Today, Jones is a Providenciales resident and a devoted evangelist of the game he credits with sustaining him through the death of his father when he was just 15. Introducing the island to American foot­ball, with all its associated life lessons, was Jones’ way of paying those gifts forward in his adopted home. 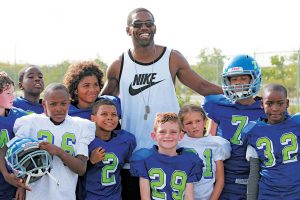 During a vacation to Turks and Caicos in 2015, Moss attended the first official football game in the country’s history.

So it was a big day for him two summers ago when teams from his new Turks and Caicos American Football Academy lined up on the downtown pitch for the academy’s first game. It was a beautiful day in June, the Premier was in attendance, and extended families filled the stands. After so many chal­lenges just to reach the milestone, Jones was relieved by the event’s success. 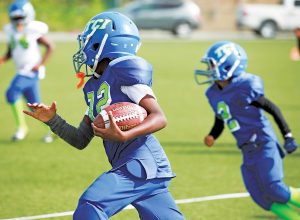 But when one of the greatest National Football League stars of the 21st century walked up, shook his hand, introduced him­self and started speaking to the young TCI players, all of Jones’ goals for the academy changed. That man was regular Provo visitor and 39-year-old TV broadcaster Randy Moss, a once-in-a-generation player who revolu­tionized the wide-receiver position during a record-smashing 14-year NFL career. He’d been vacationing on Provo, heard there was going to be a football game, and dropped by on a whim.

Or was it TCI magic? Because just a year later, in the summer of 2016, Moss would play an important role in the first of what he hopes will become an annual, week-long camp for youth football players on Provo.

“When I came over here last year, Ryan was putting on the first football game on this island, and the kids fell in love with it,” Moss remembered in July during a break at this year’s first-ever Academy instructional camp. “Just seeing how they took to me and the questions they asked, I fell in love with what Ryan was trying to bring to these kids.”

Moss’ surprise visit might be the perfect example of the serendipitous connection that sometimes sparks between accom­plished visitors and the people of the islands. And the players weren’t the only ones who felt it.

“It was emotional,” Jones said. “I mean, he’s a Hall of Fame wide receiver, the best wide receiver since Jerry Rice, so the best-of-the-best showed up. On top of that, to have him at this first game, and it was well organized and I was proud of it and the kids were proud of it. To have the Premier show up and then have Randy show up, it was everything that I thought was going to be possible here.”
What touched Jones most was watch­ing the NFL superstar interacting with his young charges.

“You could just see it took him back,” Jones said. “Randy comes from a small place, with very few opportunities, and became a star out of nothing. To see him connect with these kids, I could tell he was looking at them and thinking, ‘I relate to you.’” 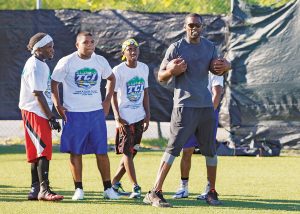 Moss connects with youth through the game of football, but his bigger hope is that the lessons they learn will help them to realize their own personal goals.

“He said that he felt a connection with the program, with the kids, and I think he realized there was no one here to help, and he wanted to be a part of it,” Jones said. “He said he wanted to organize a camp. But it didn’t stop there, that’s for sure. He had big ideas.”

To appreciate what a player of Moss’ stature means to the future of American football in the Turks & Caicos, it helps to consider his impact on the professional game. Before Randy Moss turned pro in 1998, NFL scouts typically put pass-catch­ers in one of two categories: Speed re­ceivers, the little guys who could blaze 40 yards downfield in less than 4.4 seconds, or possession receivers, the big guys (6-2, 200 pounds) who relied on strength and athleticism. Moss was a 6-4, 210-pounder with Velcro hands and mind-scrambling 4.25 speed.

In his rookie season, Moss averaged 19 yards per catch and scored 17 touch­downs, an all-time rookie record and the first of multiple all-time team and league records Moss would claim before retiring in 2013. He left the game in his late 30s as a consensus future Hall of Famer.

To the general public, Moss remains a big, brash, telegenic superstar. But his swaggering NFL celebrity hid the emotional marks of a tough childhood in rural Rand, West Virginia, an impoverished community of fewer than 2,000 residents. His incredible talent gave him a shot at something better, but Moss started life from a profound deficit. Given those chal­lenges, It makes sense that he’s devoted much of his adult life to helping children.
In that regard, his participation in the Academy’s July 2016 camp is entirely in character. Moss could have made a dif­ference just by showing up. Instead, he brought along some friends, including Houston Texans defensive tackle Vince Wilfork, Houston Texans wide receiver DeAndre Hopkins, former New England Patriots running back Kevin Faulk and retired Baltimore Ravens running back Matt Lawrence.

“I think it’s my turn to give back to the game of football, and any way that I can teach the game is what I am willing to do,” Moss said. “Here in Turks & Caicos, this island loves football. I mean everywhere I go, every time I come here, I hear people are talking about their NFL team, asking questions. ‘How do you think we did in the draft?’ and “Who’s your team?’”

Not surprisingly, Jones and Moss worked well together, and the camp proved a roaring success. 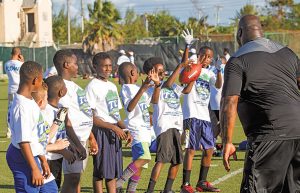 “People think that kids don’t like disci­pline, but I think the opposite is true,” Jones said. “They crave discipline, they crave direc­tion. When Randy and those guys came out, they were excited to be told what to do and what not to do. And as soon as they were told, they reacted like every other football player that I’ve seen: They followed the line and they did their job.

“(Daryl Williams from Clement Howell High School) and I are football coaches day in and day out, so we end up being like the parents. But when they actually connect with a Randy Moss or those guys, I think it’s about imagining themselves as them. It cre­ates hope and a goal and a role model. Who knows what they’re going to aspire to be, but it’s more than they are today.”

The kids clearly get something out of Moss, but there’s something in it for him, too: The luxury of being treated like a normal human being instead of a sports celebrity.

“Anywhere we go, I think that a lot of people look at the television and get a lot of things mixed up,” Moss said. “They think we’re bigger than life. I think once you get to travel the world and get to know people a little bit more, they understand you a little bit better.

“A lot of people get discouraged at times because they’re from a very small upbring­ing. That’s one of the things I try to give them. You know, I made it, and if I can make it, you can make it.” 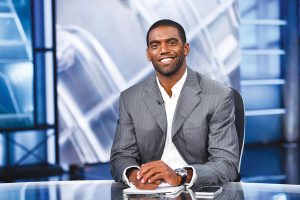 Randy Moss signed with ESPN this past July as a commentator for Sunday NFL Countdown and Monday Night Countdown. He will also contribute to the network’s annual Super Bowl week coverage.
( JOE FARAONI/ ESPN IMAGES)

With the Provo Academy now off to a roar­ing start, Jones and his partners, sponsors and supporters are looking for ways to build on the momentum Moss has provided the program. They want to teach the game to more kids, create more opportunities for competition, learning and advancement. That requires money, sponsors and man­power, but Jones is optimistic.

“We’re looking at some creative ways of doing that,” he said.

TCI football still faces huge hurdles, but Jones draws hope from Turks and Caicos rugby, which recently saw three of its top youth players sign athletic scholarships to a major university in the United States. “These kids are athletically gifted and dedicated, and I think there is much more that we could do for these kids to get them scholarships and access to higher education.”

And Moss? It sounds like he’s on board for all of it.

“I would have come over here anyway to just enjoy my vacation, but when I found out Ryan was over here with the game of football, it’s just what I do,” Moss said. “God has blessed me to do some incredible things and meet some incredible people. It’s like I told the kids: ‘If you put your focus and your respect into that little pigskin ball, it can take you places.’”