For his debut entry in the competition, the chef wanted to create a dish that was fresh, comforting and showcased local ingredients. He came up a simple recipe featuring one part grilled South Caicos lobster, one part homemade pasta, a smooth cream base, and the competition’s most important ingredient: Chocolate.

For his friends and fans, the dish seemed a perfect representation of Townsend’s personal trademark: Blending food cultures into new ideas that pack a perfect flavor punch.

Townsend joined the staff at Somerset resort’s signature restaurant as executive chef in 2015. He came to the islands from Toronto via Florida, where he’d been spending his winters. His Florida experience “is kind of what inspired me to come to the islands, aside from the fact that I would be happy if I had gills and fins,” he said (Townsend is also an avid SCUBA diver).

From Townsend’s perspective, cooking is more than his profession. It’s in his DNA. It’s who he is.

“I have been cooking my whole life and I am too old to tell you how long that is,” he chuckles.

Though he began his restaurant career as a teenager in the “world-class city” of Toronto, where he was raised, Townsend traces his culinary roots back to South Africa, the country of his birth. He identifies his native culture as “Cape Coloured,” a vibrant fusion of indigenous African mixed with Malaysian, Indian and European contributions.

“What graced our Sunday table was very eclectic fare, everything from Asian to European. Always a couple of different kinds of curries, very ethnic, homespun-style cuisine,” he said. “All those influences growing up are I guess, what originally inspired me.”

Learning his craft hands-on in Toronto’s heady restaurant scene gave him the practical insights he needed to creatively re-interpret his culinary heritage with confidence. “There was nothing we couldn’t cook,” he says excitedly.

Eventually he opened a chain of restaurants in Toronto, serving up an eclectic mixture of cuisines on a menu that challenged traditional fine-dining concepts. “It was Thai, East Indian, West Indian, Creole, Mediterranean, a little bit of everything, because I love to cook food from all different cultures.”

To Chef Brad, the origin of a food’s traditions isn’t what matters most. “To me it’s about the fellowship of the meal.”

Eventually he put the restaurant business behind him and went into corporate catering. It was a nice life: He spent winters in Florida and returned to Toronto in the summer to cater functions. But by 2015, he was ready for a change. 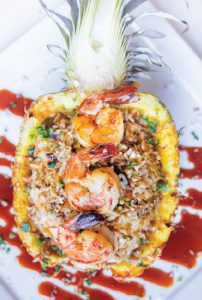 The menu at Pavilion features a mix of intercontinental fare and local cuisine with Chef Brad’s ethnic spin.

The job at Somerset’s Pavilion seemed a natural progression “because in my chain of restaurants in Toronto, there was a lot of Caribbean fare.”
Though the restaurant’s name may suggest a Continental concept, the menu at Pavilion is anything but traditionally French.

“I would say modern Caribbean,” he replies to a question about the kitchen’s style of cooking. Dishes feature intercontinental fare, such as steak and lobster. But he also pays homage to his roots.

You will find Thai-inspired dishes, such as Grouper in a green Thai curry.

“It incorporates the local cuisines, local product, with my ethnic spin on it.” He points to a Snapper dish with a Creole-inspired sauce. The genial chef says it’s his philosophy to create interesting but approachable meals. “A little bit avant garde, but still identifiable.”

And since “the fellowship of the meal” is more fun when you’re exploring new tastes together, Pavilion offers a variety of appetizers to give people the chance to try different foods.

Chef Brad says he enjoys feedback from his guests, and the camaraderie with his fellow chefs was one of the highlights of his Chocolate Lovers Competition experience. Interacting with people, cooking from the heart, these are character traits that are obvious when you have the pleasure of getting to know Chef Brad.

And then you taste his food: Truly award-winning.