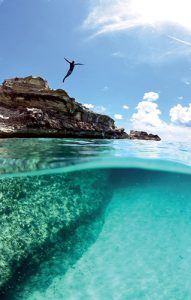 When you go on a tour with North Caicos native Brent Forbes, you can feel his excitement at sharing stories of growing up in the islands.

Ever since its humble beginnings on Providenciales, outdoor guide service Big Blue Unlimited has always balanced a playful spirit of adventure with a drive to exploration. But as the men behind the pioneering Provo outfitter reflect on Big Blue’s 20th anniversary, what seems to endure – passing from the original founders to the next generation of guides – is the never-ending quest to experience Turk and Caicos in new ways.

“Our yearning to explore and discover new things – as curious human beings, but also just sort of as scientists – is very much just part of who we are,” said Mark Parrish, who co-founded Big Blue with Philip Shearer. “(Big Blue) came about as a result of our interest in exploration. So many times when I’m on trips, I’m getting just as much of a kick out of it as our guests are, sometimes even more, because I understand how special it is, how remote it is, or how difficult it is to actually be there. That yearning to find something new, or learn something we didn’t previously know – whether it’s about an ecosystem or a cave system or bird life – that’s kind of how Big Blue started.”

The success of their venture was recognized this fall when both of Big Blue’s founders were individually nominated for the Caribbean Tourism Organization’s Caribbean Adventure Ambassador award. While Shearer and Parrish remain active on the touring side of things, Big Blue has grown alongside the Turks and Caicos tourism industry. So how does that original spirit translate through the newer generation of guides?

Brent Forbes, who joined the Big Blue team in 2007, grew up in the Kew community on North Caicos, also known as “the Garden Island.” In more than a decade with the company, he’s watched Big Blue evolve and enjoys opportunities to share his Turks & Caicos with visitors. It’s a balance between his ongoing personal exploration of the environment and the sense of discovery he provides to participants on his tours.

“The flavor of the Turks and Caicos Islands we present (to clients) is unique,” Forbes said. “The North and Middle trip that I do, it is my favorite because I get to show my home island, the way I have experienced it through my eyes.”

Sometimes that means discussing marine life on kayaking, paddle-boarding or snorkeling excursions. Sometimes that means climbing trees or introducing visitors to the islanders’ traditional medicinal uses of native flora. Regardless of the topic, a guide’s curiosity and experience fuels a new cycle of exploration and discovery for visitors. The result, he says, is a far more memorable experience.

“What I contribute is the ability to educate, as well as guide,” Forbes said, describing explorations he’s led to historical sites on North, Middle, East Caicos and South Caicos. “History is a very big part of Turks & Caicos, and I’m proud to be one of the members who takes people out to see it.” 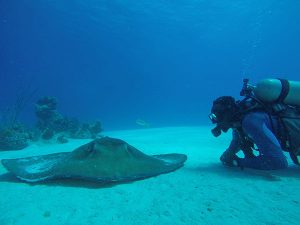 Ben Zirin’s love for the water sparked during his first year with Big Blue. Today, he is an avid freediver and SCUBA instructor.

Like Brent, Ben Zirin grew up on one of “the family islands” – in his case, South Caicos. And while they both came to the company with an excitement for the environment, Zirin had an extra, extraordinary step in his journey.

When he was first hired to sell tours in 2009, he couldn’t swim. Eight years later, he’s a boat captain and a certified dive master.

Zirin gave swimming a try after Parrish suggested it in his first year. “For about a month or so, I was walking down to the beach, (going in) neck deep, trying to tread water and see if I could get it. Eventually, one day, I started floating, I was actually treading water for a little bit.” After gaining the confidence he could learn to swim and doing so, came his next leap. “Then I went on my first snorkeling trip and saw a shark.”

That moment of adventure and exploration changed his life.

“After my first snorkel trip, I knew that I wanted to be on the water. Seeing all the vibrant colors, seeing all the marine life, it just told me ‘you need to know more about this, you need to do this.’ And now I teach diving.” Among other things. He’s now a free-diving enthusiast, a kayak tour leader, a SUP instructor and a tour boat captain.

“Philip, Mark and the staff members, all my colleagues, the whole team, they make it like it is a family and that is how we look at everything,” Zirin said. “You always want to support your team, help your team and push them to succeed.”

For Shearer, looking back on two decades of exploring Turks and Caicos with Parrish is a pleasure (“I wonder how many places the two of us have laid our eyes on,” he says). But looking at what they’ve created and the way the team has embraced it, comes with a sense of accomplishment. “We forged a really good path,” he said.