Without question, the Turks and Caicos has plenty of reasons that attract visi­tors to its shores. Just one glance at the turquoise waters affirms its allure. But, for Johnny Boychuk there were two other decisive factors that led to the islands becoming his ’go to’ vacation spot: his Aunt Leslie and Uncle Todd. His first visit is still a fond memory, “We went deep sea fishing, and snorkeling obviously.” It marked the year 2010, the beginning of many island adventures to come.

Lesser known to most at the time, Boychuk knew Turks and Caicos as the Caribbean outpost of his adventurous kin – Todd and Leslie Foss – who traded careers as teachers in Western Canada for the entrepreneurial life as owners and operators of an island rental car agency, Grace Bay Car Rentals, in 2006.

Family has always played an important role in the 33-year-old Canadian’s life. Still today, he returns to his hometown of Edmonton every year, where he spends summers close to his tribe.

But come September, Boychuk packs up his skates and returns to the hotbed of his life as a professional hockey player. For the past three years, New York has been that epicenter, where Boychuk is a key member of the NY Islanders defense.

Ice Hockey has been at the core of the defenseman’s life since childhood. “Grow­ing up in Canada you basically live with snow for half the year and it’s cold.” That meant one thing for Boychuk: playing lots of hockey.

“I have always had fun playing hockey, and I never quit.” Add in a little luck, and you have the hat-trick behind Boychuk’s winning formula.

Boychuk was drafted in 2002 by the Colorado Avalanche, but it would be a number of years of dedication playing in the American Hockey League before he would make his NHL debut. That day finally came in January 2008 when he played for Colorado against the NY Island­ers. After being traded to Boston in June 2008, he had a banner season in the AHL, eventually leading to his first one-way contract with the Bruins in 2009. 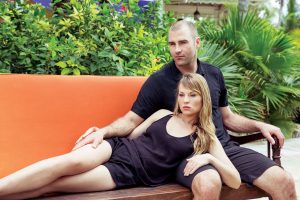 Boychuk and his wife Sheena have been visiting the islands since 2010.

Just two years later, in 2011, he reached the pinnacle for any player in his sport when the Boston Bruins won the Stanley Cup Championship with Boychuk on the blueline. Needless to say, it was an excit­ing year for Boychuk. That summer he also married the love of his life, Sheena Burletoff.

The couple lived in Boston until Boy­chuk was traded to the New York Islanders in 2014.

Months before his first season with the Islanders ended, the team signed the popular player to a seven-year extension contract, keeping him in New York until 2022. Longevity with the Islanders is something Boychuk is excited about.

“Our team is getting better every year. We are a young team as well, and I think there is a lot of positive upside. If you look at us right now, we are going to be really good for a lot of years to come.”

Team commitments – including appear­ances, training and games, keep Boychuk permanently on the go throughout the season. But in recent years, when a break in the schedule allowed, the Boychuks grabbed a convenient direct flight and headed south. It’s was a chance to un­wind, but also get in some valued family time.

Moving to Boston brought him within a four-hour direct flight to TCI. “It’s just easier when you live closer to a place where family is.” With his latest move to New York, “we are a closer travel distance to Turks & Caicos than we are to home.“

During visits, the couple did all the reg­ular things tourists do: sit on the beach, go snorkeling, fishing. But his favorite activity in TCI: Relaxing.

“That is what I enjoy the most. When you go to Turks & Caicos, you just relax and don’t have to worry about anything.”

Vacations have changed for the Boy­chuks since their daughters, Kenzie and Zoey, were born in 2014. But, Turks & Caicos remained an ideal getaway spot for the whole family. In their three years of life, the twins have already visited the TCI three times. The two seasoned travelers – they also occasionally accompany mom to home and away games to cheer on dad – are well accustomed to island life.

“They always enjoy their time when they come down. They love the beach, the water,” Boychuk explained. But there is one other special interest the two have here he pointed out, “they love seeing their aunt and uncle as well.” 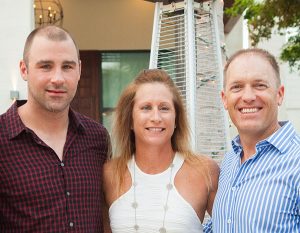 In April, Boychuk attended a local fundraiser with his aunt and uncle, Leslie and Todd Foss.

Getting out to try the variety of out­standing restaurants on Provo is also a fun part of visits. His favorite local dish? “I enjoy having the fish, because its fresh and if you catch it, it even tastes better.”

On their most recent trip, Johnny and Sheena joined Todd and Leslie on a night out to support a local philanthropic event called ‘Taste of Tapas’.

Put on by the Turks & Caicos Hotel and Tourism Association, the event hosted at The Shore Club is an annual fundraiser to support the association’s culinary arts and youth education programs. Ten participating restaurants impressed guests with unique and exciting small plate samples of some of their most creative dishes.

“It was totally different food than you might ever try and everything was excellent.” Combine that with a relaxed atmosphere and a group of friendly people having a good time raising money for a cause and it is no wonder the laid back Boychuk fit right in.

It was a short, but sweet trip for the family, one last time to enjoy the beach before heading to Canada. The Boychuks are now settled back into a busy summer schedule in Edmonton, where Johnny’s routine includes work­outs and skating, getting prepared for training camp in the fall.

Coming off a strong finish for the Islanders to the 2017 season, he is look­ing forward to what is to come. “It is going to be exciting to get on the ice. Especially with guys on your team you are friends with and you enjoy playing hockey with,” he said. The team has its first scheduled pre-game on Sept. 17.
Hopefully the future will also include the NY ‘Islander’ returning to these islands. “We will be back, 100 percent we will be.”