island anglers get the max out of annual tournament 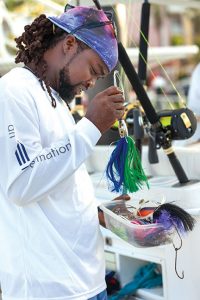 It’s the final sunrise of the three-day, 22nd annual Caicos Classic IGFA Billfish Release Tournament, and the crew of Panoply, a charter fishing boat out of Providenciales, is tied for last place. The Caicos Classic is a popular event with a roster of top international teams, but it’s also a qualifying tournament – and with every passing hour, the team’s hopes of securing a spot in their sport’s world championship are fading.

Team Panoply’s turnaround starts with a stroke of good luck when an early morning catch puts them back in the running. Everyone on board realizes one more fish will put Team Panoply within striking distance of the title, and the chance to represent the Turks and Caicos in the finals.

And somehow, that’s exactly what they did, beating the clock with a late catch.

In addition to Garcia and Barron, Panoply’s crew at Panoply Sport Fishing and Luxury Charters is comprised of Delphine Hartshorn, the team call her “boss lady”, Gervergo Delancy, the Provo-born captain of the company’s second boat Due West, and Dario Gardiner, a first-mate from North Caicos. Each has been fishing these waters since childhood. 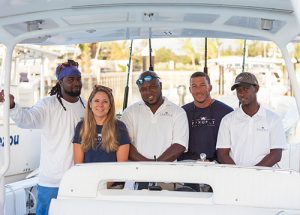 “(Qualifying for the World Championships) is massive,” Hartshorn said, “It’s not only the opportunity to fish somewhere new, but to wear our flag while we are doing it.” Hartshorn, who developed her passion for the sport on the water alongside her father, says blocking off time for the team to fish together is important. Team Panoply is a regular entrant in local tournaments. In the past year, the crew also took part in March’s Wine Cellar Golf and Fishing Tournament and the annual Grand Turk Fishermen’s Tournament in June.

“It’s a community thing,” Hartshorn said, as she runs down the list of local and international causes supported by TCI fishing tournaments. “That is why we participate in all of them.” But it’s also an opportunity for this group of friends to do what they love most. “We all know how to have fun and we all know how to get serious,“ Barron says each member of the crew brings something unique that supports the team’s efforts.

“It’s pretty technical, determining where the fish are, because they move so much,” Barron says that is where experience is key.

“It’s up to you and your crew to decide what is going to be the best area for the guests and where the fish are going to be.” But success once you get there depends on the First Mate, who must read the water. And Hartshorn says they have two of the best. “(Jose) has the best eyes. He can spot birds or a splash.” she said. “And we call Dario our Super Mate.” Then it’s down to getting the fish in the boat. Provo native Hartshorn – who released her first blue in the Caicos Classic in 2012 – takes that job seriously. “She’s a beast on the rod,” added Barron.

And win or lose come April, it’s all good for the crew of Panoply.

“Whether we are all fishing together or putting a guest on their first billfish or filling the box with tuna,” Hartshorn said, “we love what we do.”