Over the last several millennia, the Conch Bar Caves have swallowed Indians, pi­rates, freed Africans, explorers, miners, ge­ologists, and storm ravaged Islanders into its colossal caverns. Stretching from 700 A.D to the mid-20th century, its chambers have housed a smorgasbord of historical bedfellows. Though many were drawn to the caves in search of shelter, treasure, and even spiritual transcendence, the last half a century has seen a multi-genera­tional succession of guardians that watch over its hallowed halls – the cave men of the Harvey family.

In a sleepy seaside village called Conch Bar on the is­land of Middle Caicos, there lies a series of underground caves stretching just under 1.5 miles; the largest non-submerged cave system in the entire Bahamas-Turks and Caicos archipelago.

Of the five National Heritage Sites under the protection of the Turks and Caicos Na­tional Trust (‘TCNT’), the caves of Conch Bar offer an otherworldly experience markedly different from all the others.  These Karst limestone caves formed from rainwater and carbon dioxide dissolved rock boast breath­taking natural formations that descend into a complex network of passages, columns, and glass like mineral pools.

Stalagmites and stalactites protrude from a Jurassic era floor littered with moss covered boulders that lead to walls of stone stretching several stories high. Though splattered with rays of sunshine that seem almost a world away, the caves possess a dark and mysterious energy that can be slightly intimidating beyond their cathedral-like main chambers. Coupled with trickily slippery surfaces, unpredictable twists, and near absolute darkness in the deeper re­cesses of its caverns, exploring without a tour guide can be a fruitless and dangerous experience. Luckily, 21-year-old Demitri Harvey, warden of the Conch Bar Caves, is there to lead the way. 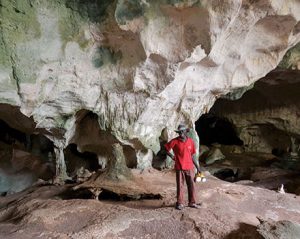 Demitri Harvey (top photo) is carrying on the family tradition, as his father, Reny Harvey, (above) and uncle Hubert Neat have done before him.

As the son of Reny ‘Rasta’ Harvey, the pre­eminent cave man famed throughout the islands for his omniscient knowledge of the caves, Demitri Harvey spent his childhood in the place he now protects and guides for a living, a job his father did for the National Trust for over 15 years.

“I was about 5-years-old when I first went to the caves,” he reminisces. “I remember playing in them with my friends. Once, when I was 9-years-old my Dad had to come and find me after being in there for hours.”

Even then, he says, “I was always obsessed with nature and my family’s connection to it.”

During his elementary school days at Middle Caicos’ Doris Robinson Primary School, Harvey’s fascination grew.  As he attended North Caicos’ Raymond Gardiner High School, the pre-Columbian past and natural wonderment of the caves still allured him.

“My father would tell me stories that were passed down to him from his uncle, Hubert Neat.  Stories about the entire cave system once being under the sea and then form­ing from fresh water and salt water. Stories about the Indians and their rituals in the Christmas Room and owls that have long gone away.”

Stories, which have checked out to be historically accurate based on findings shared with the National Trust by visiting geological researchers.  Still, with academic opportunities and the technological access to information his forefathers did not have, Harvey is committed to absorbing as much modern based research about the caves as he can.

With the passion he’s possessed since childhood, his father’s teachings, and mod­ern science as a guide, upon his father’s retirement in 2015, Harvey was offered the job of Conch Bar Caves Tour Guide by the National Trust.  Taking pride in his descent from a line of Middle Caicos cave men, he took it.

Today, Demitri Harvey guides visitors from all over the world into the belly of the Conch Bar Caves.  He illuminates its history, explains its wondrous formation, and tries to keep tourists from slipping and sliding on the rocks, oftentimes to no avail.  It’s all a part of the tour and one of the most fun aspects of giving it, Harvey says.

“I want my guests to have a true cave ex­perience, to laugh, and most importantly to recognize just how amazing mother nature can be.”