Chef Edwin Gallardo’s award-winning chocolate donut will eventually make an appearance on the menu at Seven, the Seven Stars Resort’s signature restaurant. But the concepts behind this year’s winner of the Sweet category at February’s Chocolate Lovers Showcase are part of everything that emerges from this popular Grace Bay kitchen. 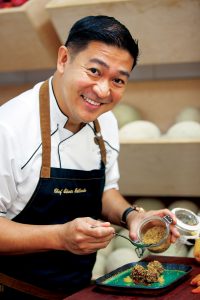 That celebrated donut – formally, the “Mini-donut filled with an apricot puree, coated with dark chocolate and finished with Dukkah” – made Gallardo the first chef to win the Savory (2016) and Sweet (2017) prizes back-to-back.

For him, the donut represented an “explo­ration of new flavors.” And winning is nice. But the creative process that led to this year’s win? That’s what makes Seven special, Chef Edwin said.

Gallardo strives for innovation, pushing the envelope with experimental flavor combinations and presentations. Praise for his Showcase donut convinced him that his approach is hitting the right notes. “It’s an energy booster for me.”

The intangible ingredients in his Show­case winner – research, experimentation, teamwork – are emerging as the hallmarks of Chef Edwin’s three-year tenure at Seven. The popular Grace Bay restaurant recently launched a new menu introducing different flavors and new approaches, and Gallardo is eager to talk about it.

Imagine this riff on traditional conch salad, for instance: Fresh conch infused with smoke, served as a ceviche, and presented with an avocado crème atop plantain brightened with lime zest.

That adventurous, curious spirit is reflect­ed in his back-to-back Showcase wins, and vice versa. Chef Edwin began formulating his recipe by studying culinary trends and plucking ideas that intrigued him. Once
he had an outline of the recipe in mind, he began coaxing out the details. Infusing the apricot filling with orange juice. Heightening the taste with anise. Adding a splash of heavy cream.

He turned to Seven’s pastry chef for the simple donut recipe, and put his own attention toward the high-risk crowning touch: That final dusting of savory Dukkah. It’s a traditional Egyptian condiment made from
nuts blended with cumin, curry, turmeric and other Mediterranean spices. Despite the donut’s dark, silky chocolate coating, “At first (Showcase guests) were hesitant to try it,” he said. “But fortunately,
once three people tasted it, the line started to fill up.”

Gallardo soaks up feedback like that, not only from diners, but also from his culinary “family” behind the scenes at Seven. “It feels like home,” he said. “I have an amazing staff in the kitchen.”

And that famous donut? “Sooner or later, it will come (to the menu),” he promises. But guests at Seven will find plenty to keep their palates entertained – on both the sweet and the savory sides – while they wait.