Jason Heath describes his style of cooking as “fusion.” The popular new chef at Kitchen 218 at the Beach House resort on Grace Bay could also, quite accurately, characterize his cuisine with some words that do double-duty describing his personality: bright, charismatic, engaging.
Of course, the man himself is a fusion of at least three identities: Trinidad native, Brooklynite since childhood, then a classically trained Swiss chef. He is equal parts exuberant and playful, demanding and on-trend, precise and focused. Just listen to him. Why fusion, chef?

“Because I have so many different cultural backgrounds to pull from,” he says, and the words begin to flow. “Born in the Caribbean and having that Caribbean influence in terms of the spices and the tastes, and then living in New York for such a long time, I have that New York flare in terms of my presentations, and then living in Switzerland and having the culinary background from there, I have the fundamentals of the European cooking style.

“So I pull all those things together and you get a chef that does crazy things – but fun things! Fresh, healthy, leaving you with a lot of happy feelings in your mouth when you taste my food.”

Hear that? That’s the sound of a man in love with his work.

Since arriving at the Beach House in the latest stop on an island-hopping luxury resort career, Heath has turned Kitchen 218 on its head. The new menu starts with fresh local seafood and builds from there, not one idea in austere purity, but related ideas in concert and experiment, crossing lines, picking up serendipities of technique and customer input along the way.

And if you’re not concentrating, after a while it sounds like the man is describing a live jazz performance, not an upscale menu.

“When you taste a dish that comes out of my kitchen, it’s an explosion of flavor, because you know, I just don’t focus on one specific flavor,” he says, warming to his topic. “Every part of the dish has to have a different taste, a different flavor, from the vegetables that we put out – it’s not just going to be a plain vegetable, it’s going to be pickled or marinated. It has to have something in it to bring out the flavors that we will add to that dish!” 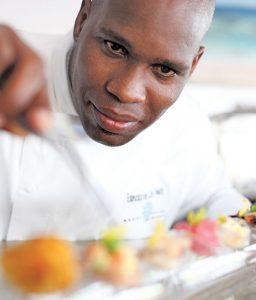 Whether from the sea or from the garden, fresh is always on the menu with Chef Heath.

That’s his Caribbean soul. The Swiss sensi­bilities take center-stage when he talks about his perfectionist’s penchant for disappoint­ment, The New Yorker steps forward when the subject turns to presentation.

“I definitely keep up-to-date with what’s happening out there. I stick to the funda­mentals, but again, I like to push the enve­lope in terms of creating something that will leave you thinking, ‘I need to come back to this restaurant and have this dish again.'”

Heath wants his restaurant to be unique. The restriction, of course, is that everyone in Provo’s fine-dining industry is more or less working with the same resources to­ward similar goals. So there’s an emphasis on seafood, an absolute requirement for fresh ingredients, even an in-house organic garden. All good, but he’s not the only chef drawing out of that box of crayons.

That’s where personality, curiosity and inventiveness shine through. Everybody’s got the same fish? OK, Heath says, let’s do something with lionfish – that wildly invasive, ecosystem-destroying reef-dweller that’s taken up residence in Turks & Caicos over the past decade of so. Turns out it’s also pretty darned tasty. Who cares if the only way to catch one is to dive down and spear it? We’ll do good and eat well! Bring us lionfish! We’ll serve lionfish ceviche!

Think that’s creative? He’s only getting warmed up. “I tend to want to get the guests involved, creating, being part of what they eat.” Result: Heath offers a menu concept called “Fish Your Way,” asking guests to tell him what they want and how to prepare it. It’s practically like a jazz musician shouting from the stage, “What do you want to hear next?”

“I think it gives the guests an option of being part of the plate and what they want to experience,” Heath says. “It also gives the waiters a chance to interact with the guests. I really want our staff to be more interactive, to communicate more with the guests.”

The changes are already earning Kitchen 218 rave online reviews from guests. Next up: A new dinner menu, scheduled for a November rollout, followed rapidly by lunch and breakfast changes.

“As I said, I like my guests to taste what they’re eating,” he says. Now there’s a mis­sion statement we can all get behind.