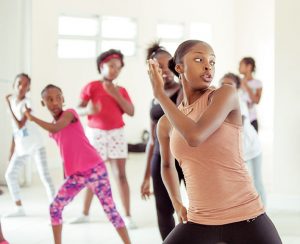 When she left the islands as a 16-year-old dancer bound for New York, Turks and Caicos native Ryesha Higgs promised friends and family not only that she would return, but that she would bring back what she learned and share it. Almost four years later, Higgs continues to over-deliver on that promise.

Last summer Higgs wrapped up the second year of her Ryesha Higgs Summer Dance Intensive, an inclusive, low-cost camp for Turks and Caicos children. In its inaugural season, Higgs’ week-long instructional program drew an enthusiastic response on Providenciales. This past summer, Higgs doubled her commitment, returning for another week of dance classes on Provo while adding a second week of the Dance Intensive on Grand Turk. The Provo intensive drew about 50 students, the Grand Turk session drew more than 60.

“Over the course of the past year, I’ve used my experiences as both a dancer and university undergraduate to think of ways to make this year’s Intensive even better,” Higgs said during her visit. “There’s a whole generation growing up on Grand Turk who also want to be a part of what is going on.”

Launched onto the international dance scene with support from the Turks and Caicos Friends of the Arts in 2014, Higgs earned a spot in the prestigious Independent Professional Studies Program at The Ailey School in Manhattan. After completing Ailey’s one-year program, Higgs spent the next two years studying classical ballet at the Dance Theatre of Harlem while attending university in Brooklyn. Her distinguished international academic record and performing arts notices merited a 2015 Turks and Caicos National Young Achievers Medal.

While she designed the curriculum to be accessible and welcoming, it was also a challenge. Each day of Higgs’ Summer Intensive began with morning classes for dancers age 4 to 8, followed by afternoon sessions for students 9 and older. Each child received classes in ballet, jazz, hip-hop and modern dance, plus additional instruction in musical theater. Both week-long sessions ended with a student performance that showcased the students’ progress.

“I was very proud of both groups, of how much choreography they were able to retain in one week. They are incredibly talented.”

She was also touched by the “amazing” community response, including individuals and local businesses who sponsored students.

With her 2017 Turks and Caicos Dance Intensive behind her, Higgs departed for London in September to begin a three-year university program in Biomedical Sciences – a natural adjunct to dance (“I like to keep my dreams diverse, because I like so many different things“). She hopes to dance in the United Kingdom and Europe during her stay. But whatever the future holds for her abroad, Higgs plans to continue expanding her dance program here.

“I look forward to continuing to dedicate my time to developing the dance community in the Turks and Caicos Islands and to showing all students that there is room for them in performing arts.”