cascade: investing in a turks and caicos dream

Whether a creative collaboration exceeds the sum of its parts or devolves into an endless, uninspired slog often hinges on a single word: Alignment.

As in: Was the original vision of the project – from concept to process to outcome – clearly communicated and precisely aligned across all parties?

Most business people can tell horror stories about collaborations that weren’t. But if you’re looking for the physical embodiment of aligned collaboration, book at week at Cascade at TC Villas on International Drive and take notes.

Cascade, designed by Ron Shaw, terraces over three levels. Each bedroom offers access to either a swimming pool or the beach.

“I kept coming back to the Turks & Caicos,” Hershey said. “This country is good for doing business. There were no red flags, and I hadn’t even looked at the beach or anything, I was just looking for a stable country to do business in.

“And then Ron was kind of the bonus. RA Shaw Designs is based on the islands, and that really kind of solidified the deal once we were looking at the kind of things he could do. I thought, ‘I have never seen architecture like this before.’ So at the end of the day I think it is a tribute to Turks & Caicos more than anything, and it was an added benefit to be able to work with Ron.”

The rest of the outline emerged from conversations with TC Villas staff. Hershey soaked up what the rental agents had learned from their clients, and boiled it down to a few must-haves: The lot had to be beachfront, the house had to have six master bedrooms, and every decision had to focus on the upscale rental market. 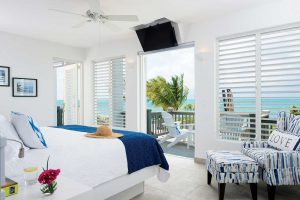 Every one of Cascade’s six bedrooms faces the ocean. 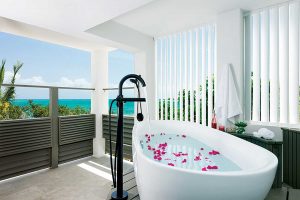 Each also features an outdoor shower or tub with views of Provos’ north shore. 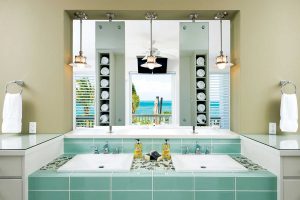 Guests can even enjoy the ocean view from the bathroom vanity.

For Shaw, Hershey’s clarity of vision offered him a clear set of challenges and opportunities.
“A lot of owners are looking to build their dream retirement (home), but this was totally, strictly intended for short-term rental.” said the veteran Provo architect. “So what I tried to do was to give them something that is like, ‘Wow this is so unbelievable!’ And we had a ton opportunity to do that here.”

But to reach that potential, Shaw first had to solve a fundamental problem: How do you design a house where six couples could vacation together, without one couple feeling like they got the worst room in the house?

His solution: Have each bedroom face the ocean. His challenge: The lot they’d selected was relatively shallow, and then sloped hard toward the beach. “Incredibly difficult,” Shaw said.

But also simply incredible. “Because of the way it’s built into the hill, the second tier deck is huge, but it’s 30 feet out of the ground,” Shaw said of his inspired design. “And that brings in the tropical living, which really engages the inside outside.

“Creating that awesome, remarkable, never-forget event through architecture, that was the whole idea,” Shaw said. “And what was nice about this is that they didn’t restrict me or give me any direction, so I had a clean slate. I had a site to work with and very basic parameters: Six bedrooms, all having a view. Go.”

Said Hershey: “We just really trusted him when we looked at the other things he’s done, so I wanted him to be free to be creative, because he’s far more creative than me. I just wanted to see what he came up with on his own.”

The result is not only one of the most arresting designs on the island, but a highly successful rental property. Opened in May 2015, Cascade’s calendar quickly filled up. “We only have about 12 weeks the house is open right now, and we still have the rest of the year yet to book,” Hershey said.

“It’s been a great investment, but as far as the people to work with on that island, I can’t say enough.”