Considering the level of professionalism in any Chocolate Lovers Showcase competi­tion, high quality is an assumed trait of any winning entry. 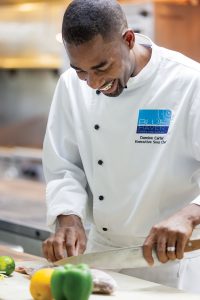 This year’s victory confirmed something island foodies have noticed over time: When it comes to turning great food ideas into uniquely entertaining food experiences, Carter has a rare gift.

The Fire & Ice star won his first Showcase in 2015 with a chocolate conch bite that sur­prised and wowed event-goers. In February, he topped that performance with a flaming, cooked-to-order show-stopper: Pan-fried fresh snapper with candied asparagus in a chocolate-coconut reduction.

In a Showcase performance reminiscent of the table-top grill BBQ on the menu at their Leeward restaurant, Carter and his team cooked the snapper to order on a grilling sta­tion, an approach that “enhances the dish,” he said. “It was a lot of fun. It really was.“
One of the more recent additions to Provi­denciales’ culinary scene, Fire & Ice at Blue Haven Resort staked its claim as the go-to kitchen for fun, shareable, one-of-a-kind din­ing experiences with the arrival of Executive Chef Laurent Ajas in late 2015.

“You will come here and find something different that you won’t have seen else­where on island. For example, our table top BBQ. We have a lot of herbs and spices we use to make these marinades. We also have the Cataplana, another specialty dish you won’t find elsewhere on the island. You can have it with clam or a mixture of seafood. It has an amazing flavor,” Carter said. “We often have guests who are really foodies and want to explore.”

Of course, every great dining experience begins with a great food idea. This year, Carter’s challenge seems to have been picking just one. 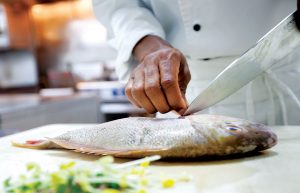 “At one point I was a bit confused in terms of what to do because I had so many ideas.” He tried grouper and wahoo, but nothing clicked until he put snapper on the grill. “And we realized, yes, this is it.”

Chocolate, coconut, asparagus and snap­per aren’t flavors that immediately spring to mind together, but Chef Damion talks about them as if the combination were obvious: First, the spice marinade for the fish, then the dark and white chocolates at the base of the sauce, accentuated with hot pepper and a coconut infusion to give everything a kick.

The key turned out to be coconut. “You have sweet and a spicy element,” he said, describing how the candied asparagus and roasted coconut flakes provide “a nice sweet and crunchy balance. It compli­mented very well.”

Carter’s second Savory title will likely raise the restaurant’s profile among Provo diners – and maybe expectations as well. But the commitment to exploration and memorable dining experiences seems fixed and elusive.

“Culinary, it never stops,” Chef Damion said. “Every day you learn something new.“