from the blue shores of the Atlantic through the beachside sluice gates and into the copper colored soul of Salt Cay run the legendary salinas. An artifact not only of the abandoned salt industry that drove the economy of Salt Cay 300 years ago, but also a place of memories for so many men, women and children alike, myself included. 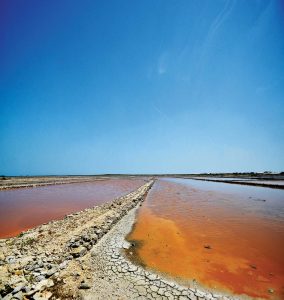 Salt Cay is the original salt-producing island. There occurred naturally, several inland depressions that either filled with water directly from the Atlantic or leached upwards from underlying rock.
The Bermudians improved these natural salinas, making them into a network of rock-bordered saltpans and building windmills to facilitate the evaporation process along its trenches. Water was concentrated by dehydration and moved from pan to pan until finally a slushy brine was pushed in to smaller drying pans where the salt finally crystalized.

The Bermudians struck white gold and Salt Cay became exporter of the world’s best salt to North America up until the end of the 19th century.

I remember my summers as a little girl walking and playing along pond trenches with my grandmother.

In my innocence never had I imagined the toil of those blistered saltpan workers that occurred in the harsh midday sun. From dusk to dawn, raking the diamond-like crystalized salt into piles and shoveling them into wheelbarrows to be toted away to the Salt house.

Today Salt Cay’s streets still lay paved in white diamonds glistening under the bright moonlight and remnants of the days of white gold have only been touched by nature and time. Home to an array of unique ecology, of birds, flowers and micro­organisms, the ponds still evaporate under the blazing sun and the briny crystals collect at its edges.

Salt Cay may be the island that time forgot, but by no means has it been forgotten by those who call it home. A rare gem in a world of fabricated mo­ments and places, from blue shores to the copper-colored soul, this diamond lays untouched.