During the two exciting weeks of athletic competition at the Rio Olympic Games, we often heard tear jerking stories of impoverished youth overcoming insurmountable odds to achieve greatness. For both Delano Wil­liams and me, natives of the island of Grand Turk, an abundance of love – and food, kept us happily unaware of any lack of privilege during the course of our childhoods. Still, Delano’s journey from a town so small we affectionately call it our ‘rock’ has been, for us in the Turks & Caicos, the most compelling story of the 2016 Olympics. 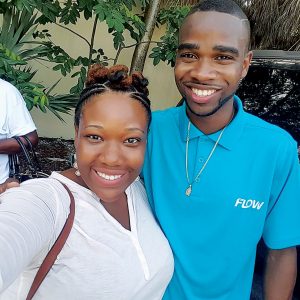 Chrystal “TESS” Charles grew up on the island of Grand Turk alongside Williams.

Delano and I both grew up in Palm Grove, Grand Turk. A quaint 10.5 square mile isle that powerfully serves as the capital of the Turks & Caicos Islands due to its seat of government and rich history. Residents of Grand Turk will tell you stories of our salt ponds, which produced millions of tons of ‘white gold’ in its heyday; Hawks Nest, where Christopher Columbus stumbled his way upon an amazing people; and the 1962 space landing of John Glenn’s Friendship 7. As political theatre for the revolutionary stage play of our first Chief Minister, the Honourable J.A.G.S McCartney, the capital birthed our first national hero. Now, with the rise of Delano Williams, Grand Turk continues to show there’s much more where that came from!

I clearly remember Delano as a preteen in and out of my house, trading video games and riding bikes with my little brother Christopher. His mom’s hair salon was a stone’s throw away (as was just about everywhere else on Grand Turk), and I was best friends with his cousin Shakita. We would all play together, walk home together, and get in trouble together, reveling in a childhood that involved walking along the salt ponds and running, sometimes foolishly, behind donkeys. With destiny at play, those innocent days in our island playground eventually lead to history for our nation through the gifts of my little brother’s friend.

Delano’s race actually started when our P.E. teacher, Mr. Neil Harrison observed his incredible speed whilst he played a game of softball. Coach Harrison began to devise a life changing opportunity for Delano to be profession­ally trained in the most famed track star producing nation on earth – Jamaica. Delano’s mother was reluctant to let her baby go, but after the devastation of Hurricane Ike that ravaged Grand Turk in 2008, she relented.

Fast forward eight years to a jubilant watch party for the Men’s 4×4 Olympic relay heats. We were all there, the same childhood friends from Palm Grove, except for Delano. He was on the TV warming up in front of a billion people in Rio de Janeiro. As many times as he had thrilled us at the Carifta games, winning gold at the Junior World Championships in Barcelona, lighting up the World Championships, the European Championships, and being embraced by track and field legend Usain Bolt – nothing could compare to the drama of that night, actually witnessing our Golden Boy at the Olympics. 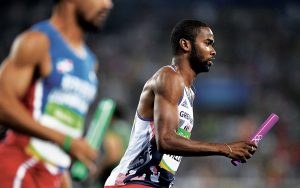 In August, Williams had the entire nation on its feet as he competed in the 400 x 400 meter relay at the Rio Olympics. (Johannes Eisele/Getty mages)

As a British Overseas Territory, Delano competed with team Great Britain, but let me state clearly, he was running for the Turks & Caicos. Dressed in t-shirts bearing his face and Turks and Caicos flag regalia, any glimpse of our man as the sprinter’s lined up prompted us to scream, “See him dea!!” As the gun went off we gave a nervous cheer, waiting impatiently for the Golden Boy’s second leg. As soon as he got that baton in his hand with team GB in a close second place – the pent up exhilaration, suspense, and adrenalin erupted from us. Delano took off like he was chasing Grand Turk donkeys and the pressure pipe of pride throughout the country burst!

We jumped, we screamed, we chanted, we cried as he sprinted his heart out dur­ing that glorious second leg, pushing team GB into first. When the final British sprinter crossed the line with the lead, I silently wept with joy because my voice was already gone. Every atom and iota of the people of Turks & Caicos filled with an almost unexplainable bursting, tingling feeling of PRIDE. Our na­tion’s first Olympian.

With celebrations underway, we received gut wrenching news that Team Great Britain was disqualified with a penalty. In a mere matter of seconds, it mattered none at all. Our pride would not be dimmed, our joy would not be snatched – we would stand a little taller in the world now as a nation. Es­pecially those of us from the island of Grand Turk, call it ‘The little rock that birthed an Olympian.’